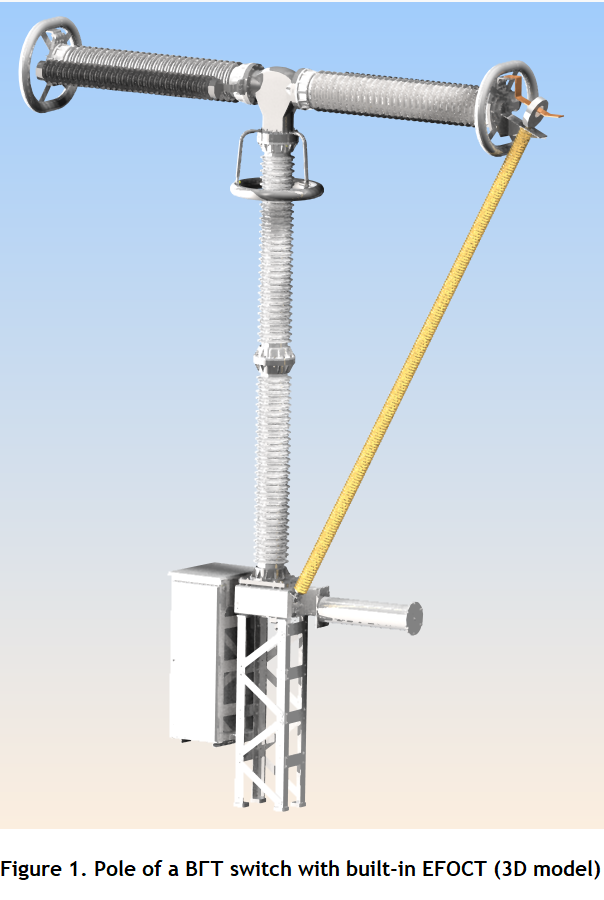 Electromagnetic current transformers (CT) are used as a source of measurement signal for creation of relay protection and emergency control systems, circuit breaker's automatic control systems, revenue metering and telemetry systems. They are produced either in oil-filled, or in gas-insulated version. But either way for voltage levels 330–500 kV these devices are essentially massive structures weighing 500–800 kg and up to 7 m high. Their mounting and installation require concrete foundations and steelwork structures, large areas at the switchyard. Using elegas or oil as insulation media forces to waste significant resources on CTs' maintenance during their lifecycle. Electromagnetic transformation principle, used in these CTs' configuration, leads to the effects of transformers' ferrum magnetizing, shape and size distortion of secondary instrument current and, as a consequence — to false operation of secondary automation and control systems.

Profotech together with UETM have agreed to create an integrated solution based on Russian technologies — elegas circuit breaker 500 kV with built-in optical current transformer and control automation. Configuration of the integrated devices based on ВГТ-УЭТМ®-500 breaker will use electronic optical current transformers (EFOCT) produced by Profotech.

The use of digital optical CT excludes the display of magnetic saturation effects. Optical transformer has a very wide dynamic range of operating currents, and due to the use of electro-optical current transformation systems generates precise and undistorted digital signal. Optical CT doesn't contain any oils and elegas in its configuration, and therefore requires a lot less maintenance. In addition, optical current transformer doesn't sustain combustion (it doesn't contain inflammable materials), and due to that it maintains increased operational reliability. Digital measurement signal, generated by the optical transformer, allows creating measurement and protection systems with completely new characteristics. So, improved response time of the digital measurement system helps to define the current's zero-crossing moments very precisely, and tripping a circuit breaker in emergency modes exactly at that moment, which will bring a vast improvement to the high voltage breaker's operational life. 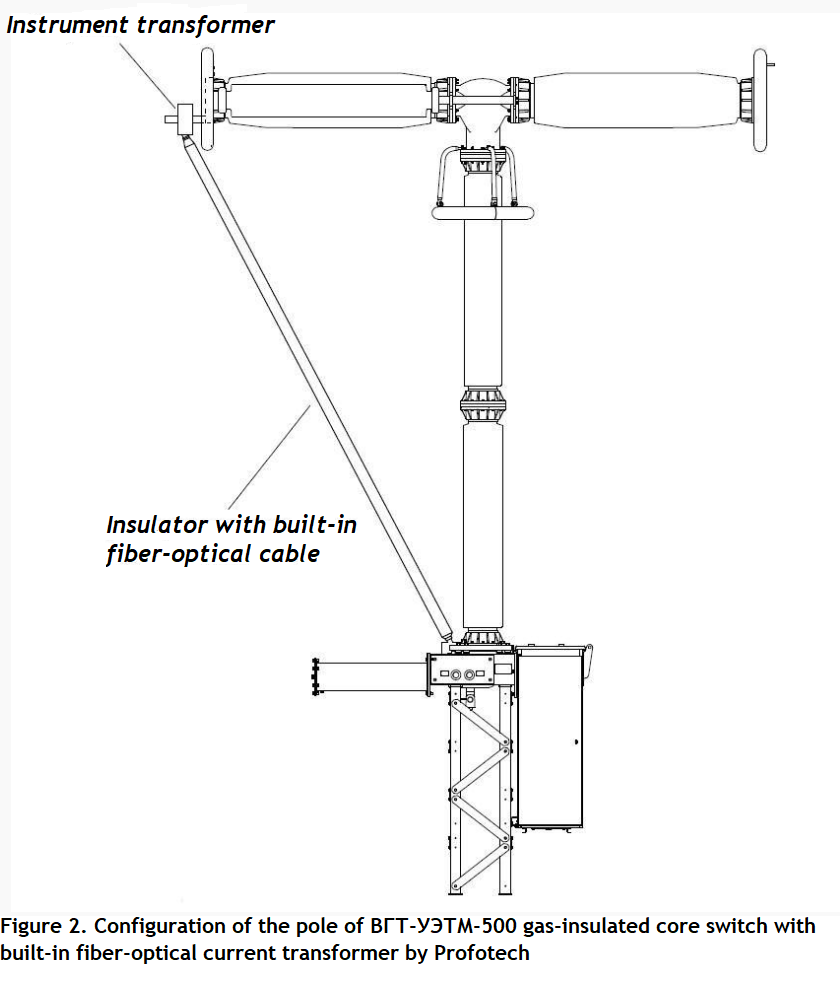 Besides, modern switchgears of power facilities often have «dead spaces», conditioned by separation of mounting locations of circuit breakers and CT. Short circuits (SC) in such zones are eliminated only by function of the circuit breaker fail protection (CBFP). However, the duration of disturbance period, during which CBFP is working, could lead to dynamic instability of the generation equipment. One of the ways to eliminate «dead spaces» is to install the high voltage circuit breaker with built-in optical CT. It shall exclude the «dead spaces» in the existing switchgear configuration without significant costs for switchyard's reconfiguration and construction of additional grid elements in the schemes of power distribution of large power objects.

Creation of the core switch with integrated optical current transformer will significantly reduce the material expenses during new construction, as installation of significant amount of secondary structures (concrete foundations etc.) is no longer needed. It will also allow reducing the size of switchgear area, necessary for installation of high voltage elements. Development of high voltage circuit breaker with integrated optical transformer will open the way for creation of the «digital breaker», which fits the digital substation technology in a logical way. In terms of operation the proposed solution seems to be optimal, as configuration of the breaker itself and its control elements do not change. This lets us to expect a simplified procedure of operating personnel training for use of the combined device, and will not cause any difficulties during installation and setup. In addition to the above, because of the application of optical technologies, the circuit breaker gets additional capabilities and new qualitative characteristics, such as observability, safety, operating speed and appropriate sensibility of protection systems. 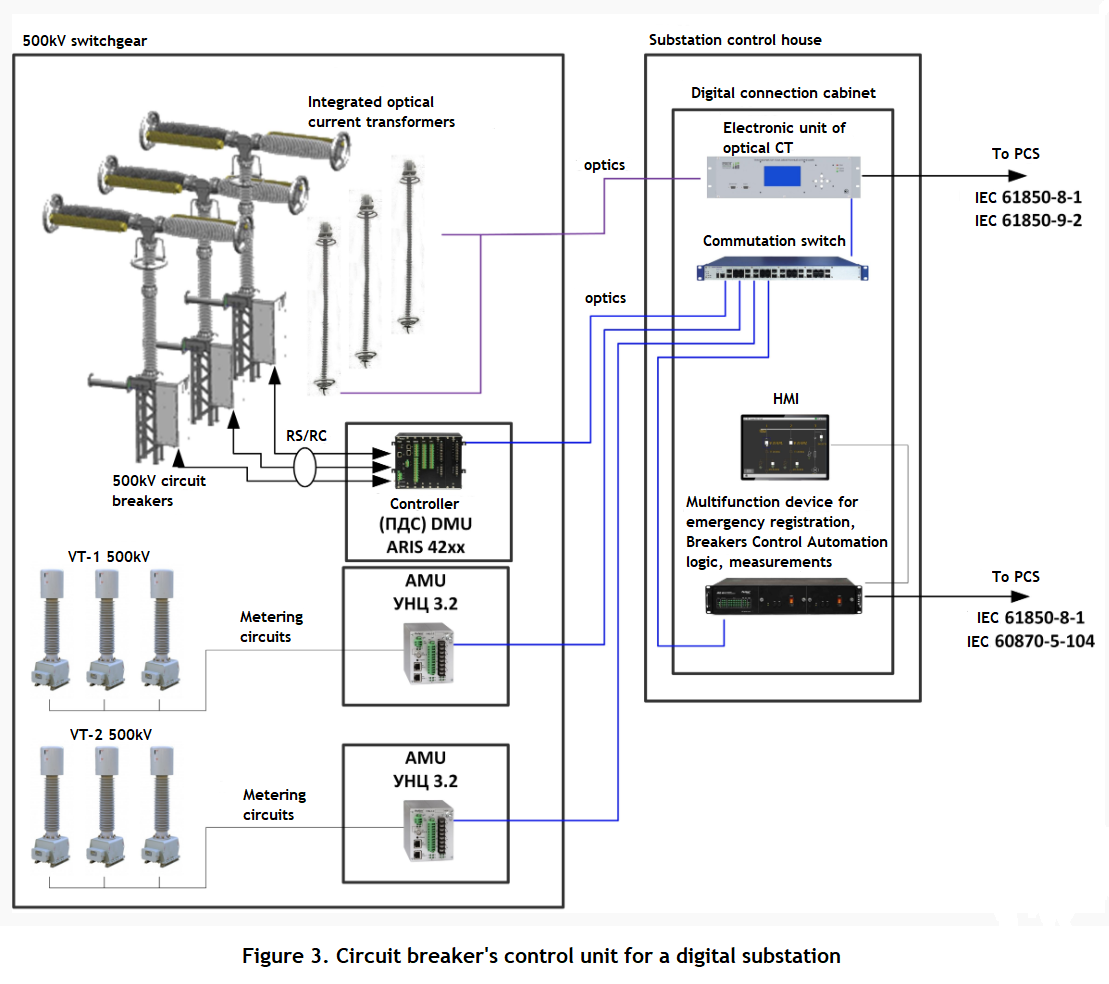 Choosing ВГТ-УЭТМ®-500 as a basis for creating the «digital circuit breaker» is conditioned by serious functional depreciation of air circuit breakers of the ВНВ и ВВБ series, which are the most common switching devices in Russia for 500 kV voltage level. These breakers were put into operation from the late 1970s to the early 1980s. With average lifetime of maximum 25 years, most of this electric equipment has practically exhausted its performance potential. As a consequence, there is much concern about replacement of this equipment with state-of-the-industry analogs. Installation of gas-insulated core switch instead of outdated air circuit breakers at functioning substations does not require performance of considerable prep activities.

In addition, at the current design stage Profotech and UETM are working out the possibility of re-equipment of previously installed ВГТ-УЭТМ®-500 breakers with upgrade kits. These kits include optical transformers themselves, elements for their connection to the serial breaker pole and all relevant electronic units. In summary, in the near future it will be possible to not only create new digital substations, but also carry out the «digitalization» of the old ones with minimum expense.

Original article in Russian language was published on the Digital Substation website.